In CPTED we talk about dead walls and live walls. Dead walls don’t do anything beyond being walls. They lack added value such as information or inspiration, posted notices, artwork, or windows providing strategic surveillance or even just a good view.
But what about windows? Can they be live or dead as well? Are there different striations?

At the low end might be an opaque window, allowing filtered light but no view. A step up would be a window you can see through, but there’s nothing to watch over and not much of a view – like a third story view into a dark alley. But how can we take windows up a notch or two?

Windows that open are consistently popular. At the most basic level, if we can bring in fresh air and sunlight, while providing natural surveillance around the school, that’s a great start. But wait, there’s more! How about if windows went beyond that? What would that look like?

Churches have long added value to windows with stained glass, adding inspiration but potentially sacrificing natural surveillance and access to sunlight. And the warmth of the sun is a very attractive feature that makes window seats a hot item in libraries. But these are still passive functions – the windows just sit there.

I’m thinking about a more active role, or even an interactive one. What if pressing your hand to the window caused a change in pattern? What if it was simultaneously an adjustable magnifier, a microscope or a telescope? Is that so farfetched? What if it was a sound enhancer, like a hearing aid, designed to vibrate? What if windows could act as virtual keyboards, for musical instruments or computers? There could come a time when pianos became obsolete.

And what if instead of acting as passive collectors of the sun’s rays, windows could harvest, conserve or convert the rays into electricity? It might look something like this prototype array, with integrated elements, highlighted in a recent issue of Sierra Club News. 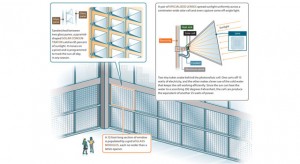 This invention, developed by scientist Peter Stark and architect Anna Dyson is described as “ an integrated, concentrating solar facade—an array of miniature generators that follow the sun like a field of transparent sunflowers. Each lens-and-solar-cell module collects light onto a photovoltaic cell while heating up a trickle of water. A full complement of modules could meet more than 20 percent of a building’s energy needs while projecting a sense of urban cool.”

With the right technology, any window can become an interactive display screen as well. This is already being used commercially, as seen at a relatively basic level in this videoclip from a Chicago Lego store:

And in this hotel room, an interactive window adjusts the level of privacy, light exposure and tinting. It can also be used for light therapy, to refresh a customer and help in the recovery from jet lag!

I’m convinced we’ve barely scratched the surface of what lies ahead with interactive windows. The primary purpose of a school is to promote teaching and learning, and maximizing every square inch of the school environment to fulfill our mission only makes sense.