One prime CPTED directive is to maintain an awareness of an environment’s main goal, its reason for existence. This is distinct from a narrower security focus, in which there’s a risk that security measures could drown out and undermine other features of the environment that reinforce its primary function. For example, a corner store needs to be optimally designed and accessible for buying and selling; a gas station has to be optimally designed for fueling cars. Wrapping either in barbed wire might make it more secure, but it would also drive customers away. The same, of course, applies to schools, but without the financial marketplace incentives that force retailers to stay functional or shutter their doors. Dysfunctionally designed public schools can hang on for decades before upgrading becomes unavoidable, politically viable, or financially possible.

It takes a while to replace schools – often as much as a century or more — and that poses a challenge when technology and modern-day needs move so much faster. At some point, gas stations may need to be replaced by charging stations, and when that happens there will be no grace period while they make the switch. Even corner stores have to carry the right products today, not next year, in order to keep their customer base. But schools stumble along with old cells-and-bells, double-loaded corridor warehouses for decade after decade as if this is acceptable. We’ve got to do a better job of keeping up.

Fortunately, there are some outstanding new schools being built that do so. Some of their features include:

• Spaces geared toward connectivity and variety, with varied seating areas allowing hobnobbing one on one, as large assemblies, or anything in between. (Shown here: Meadowview Middle School, Washington, Cyber-bar, courtesy of Fielding Nair International.) 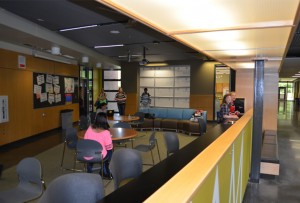 • Extensive use of cutting edge technologies, including ample access to power, power-over-ethernet, and internet access. One step in this direction was when schools added rolling cabinets full of laptops, COWS, or computers on wheels. The next step will likely involve a combination of BYOD (bring-your-own devices) and computers powered-up, accessible, and placed throughout the school, rather than locked up. One study found that, big surprise, if computers were already booted up and accessible, students were more likely to use them! (Shown here: a hallway computer, up and running at Hillel School, courtesy of Fielding Nair International.) 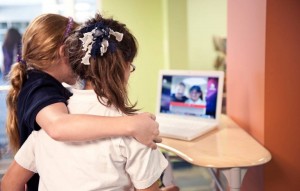 • Another huge piece of this evolution involves energy-efficiency, which goes hand-in-hand with environmental awareness. Today’s young people are increasingly aware that the burden has fallen on them to save the planet, and they need buildings that take this task as seriously as they do. The buildings themselves need to simultaneously integrate and teach energy efficiency. As we accept this design requirement we must build transparency into the ways in which buildings work – how heat, cooling and power are generated and conserved. A century ago the transparency was taken for granted: every child knew how heating worked: you built a fire, and they knew exactly how to do that. They also knew how cooling worked: you opened a window. They knew how to do that to. In today’s world, students know how to flip a switch, but if the power goes out, they’ve no idea what to do about it. This lost knowledge base must be restored. Students have to know how their world works, and be empowered to maintain it. Schools should be tools to this end. When we embrace this responsibility, to paraphrase Gandhi just a bit, schools won’t just talk about what we want to see in the world. Schools will be what we want to see in the world. This takes the concept of architectural integrity to a whole new level – it’s not enough to just build something that doesn’t fall down. We have to build schools that teach, and inspire, and embody the concepts, qualities and technologies that we want to see in the wider world. 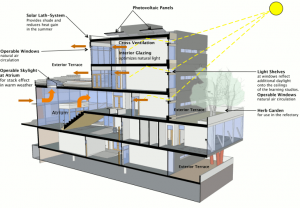 It’s inspiring to see that a number of architects are fully on board with this philosophy, building schools that may seem radical in some respects, but will quickly become the norm, half because it’s the right thing to do, and half because, pragmatically, energy-efficiency means schools spend less on fuel and more on education. (Illustration: Brussels International School, Belgium, Fielding Nair International Architects.)