It’s a great indicator of where schools are going that, at least in many locales, on-site gardens are becoming standard features, rather than rarities. Examples are easy to find world-wide, ranging from all corners of the U.S. to, well, pretty much everywhere else.

Most of the rest of the world is far ahead of the U.S. in this respect. To NOT garde

n would be considered ridiculous, as food is otherwise hard to come by. (Pictured at right, the garden at Home of Hope Orphanage, Tibet.)

L.A. students are more than holding their own, developing their own extensive gardens, replete with everything from Lemon trees to Collard greens, Chinese medicinal herbs and tomatoes– even a fish nursery that directly feeds the Bok Choy in their aquaponic gardens.

So where do we go from here? As gardens become more and more standard, how do we maintain student enthusiasm? How can we make gardening even more wonderful than it already is? County fairs have a long tradition of awarding ribbons to the biggest pumpkin or funniest zucchini, but can we think bigger? Sure. Check this out: In Swaziland, where most families are subsistence farmers, and where droughts have led to widespread hunger, students developed an inexpensive method of hydroponic gardening that boosted production 140%–and won a 2013 Google “Science in Action” award as a result.

And last but not least, I can’t blog about gardens without offering up a shout-out to garden hero Rick George, (at far right in photo) a teacher who sang the praises of gardening long before it grabbed hold nationwide. Rick “retired” in 2006 but hasn’t slowed down a bit. 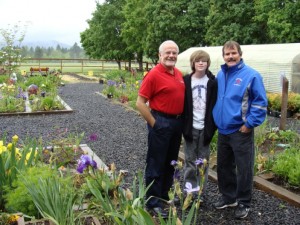 I met Rick while inspecting Seven Oak Middle School, in Lebanon, Oregon a few years back and was impressed by his extensive gardening project. He recruited high-risk kids to help put in a large vegetable garden, (pictured) and suddenly the kids became enthused about school! Their attitudes turned around! Their grades improved! This was even more fun than sitting at a desk while being lectured! And before long the rest of the student body wanted to get in on the act.

Gardening is a great reward unto itself, but Rick took it a few steps further, drawing other teachers into the garden, where they gradually integrated math, science, chemistry – even writing classes – into tomato and flower cultivation.

s it turns out, provide all kinds of angles to measure, and there are few better places then well-tended gardens for quiet contemplation. Rick’s on his 39th year now, working with 38 classes in five area campuses, each with its own plot. And of course, as a bonus, better than average school lunches.