Hallways are generally underutilized, dysfunctional spaces, jammed full of students for five noisy minutes at a time, during which they serve as central arenas for frantic posturing, flirting and bullying – establishing human connections of one sort or another – while, oh yes, grabbing books out of lockers, slamming metal doors and racing to the next class before the bell rings. Something’s terribly dysfunctional about this. Every square foot costs money, and most schools have no cash to spare, so the fact that we regularly create such dysfunctional spaces at high cost seems short-sighted.

Fortunately, occasionally someone comes along with a better idea. My architect friends at Fielding Nair International are masters at this sort of thing, and you’ll see examples of their work frequently in this blog I expect, because they’re clever, and their work is so illustrative, and also because they’re generous and willing to share.

What you see here are before and after shots from some of their work at Thomas Jefferson High School, in Alexandria, Virginia.

Notice how the early version, like most classic double-loaded corridors seen in prisons, schools and cheap hotels, is begrudgingly utilitarian, institutional and dreary. 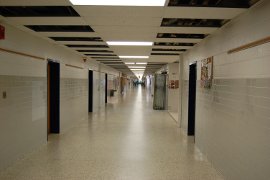 Compare this to the far more functional remodel – well lit, visually inviting, designed as a space for small group projects. This takes dead space and breathes life into it. Even the walls have been invigorated, with a color scheme that flows into the floor tile design, making the space feel even larger, and with built-in display cases for students’ creations. We also see at least two different seating options. 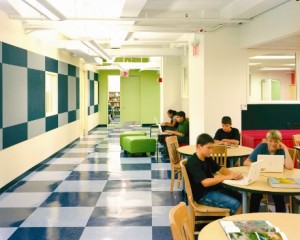 A beautiful example of architecture done right! If you’ve snapped pictures of other stellar work, by all means please send your jpegs my way.

(Photo credits: Fielding Nair International is the source of both the architecture shown and the photos thereof.)