Floundering for an Identity

I remember next to nothing from before the age of ten, other than being extremely withdrawn, maybe borderline autistic. I mostly wanted to be left alone. I went to a shrink, who didn’t help. I tried out a poetry club at my mom’s insistence. I think I was the only member under the age of eighty. I won a plaster bust of Beethoven, about three inches tall, before quitting. I had no friends. I read a lot of books. I put no thought into who I might be.
My world shifted gears when I went off to a free-form summer camp when I was eleven. The place was out of control. Kids ran wild, with no organized activities of any kind. One day I wandered into the staff house and saw counselors sitting on the floor in a dark hallway, shooting up. Nobody said anything. I backed out. Later, a boy named Pee Wee tried to hit me with a stick and I kicked him. Everybody liked him better, and I got chased into a bathroom, where I managed to lock the door, terrified.
The following week, a college theater director came to visit, looking to cast a kid for the drama, Dark at the Top of the Stairs. I got the part and went off with the guy, pretty much just like that. 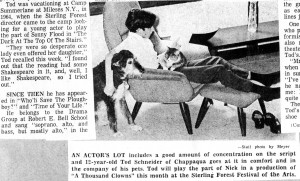 When the summer ended I was surprised to learn that my family had moved to a new home, a beautiful place notable for its large wooden beams, plaster walls, used brick, and a persistent leak. I started middle school a few days later, getting off on the entirely wrong foot by performing pantomime at the welcoming ceremony. In front of my new classmates. In tights.
Things went downhill socially from there, but my summer acting experience helped draw me out of my shell. On stage I managed to appear at home, self-confident. Off stage I continued to feel awkward and insecure, but I pretended otherwise.
I kept acting for years. Acting on stage taught me something about acting off stage, much like everyone else. I think we were all stumbling forward, feeling our way, trying out roles, looking for a good fit. The fallback position often won out: classic high school archetypes–Jocks, Hippies, Nerds, Cool cats, free spirits, tough guys, trouble makers…
For the insecure, meaning most of us, there’s a lot of comfort in taking on an identity or, on the flip side, pigeon-holing or passing judgment on others. Maybe I don’t know who I am but check out that guy! Clueless!
I suppose some make it through adolescence brilliant, charming, self-confident and unscathed. Lilly Singh might be such a person. Check out her take on all this:

Odd how classic roles hold up over time. But whatever identities we adopt, the fact that we do so makes it clear how important it is to us to just plain have identities, even temporarily. The teen years can be a scary rite of passage, and good masks can go a long way in getting us through. It’s just that somewhere along the way, if we’re fortunate, we realize that we can’t find ourselves while simultaneously pretending to be something else. That’s when we work up the courage to drop the posturing, look in the mirror, and start the hard work of honest self-examination. And growing up.