Just like Fred McMurray in that sitcom back in the 1950s, I’ve managed to raise three awesome sons, none of whom are axe murderers, and I’m very proud of that fact. They all made it through college and are happy in their lives, so this makes me something of an expert in the field. As many parents know, if anything goes right, we get credit for it. High fives all around. Anything that goes wrong, it’s a mystery. 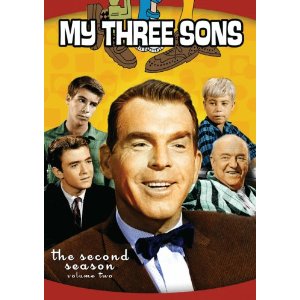 My first son breezed through public school, then on to Carleton College, Cornell University and a good career. My second son struggled through public school, but soldiered on, made it through the public U with a degree in political science, pursued film making for a time, spent half a year tripping around Prague and made it home again, still in one piece. My third son aced elementary school, found middle school barely tolerable and rejected high school outright as too juvenile and a waste of time. He took a year off, practiced violin, found a renegade unlicensed underground science academy in the warehouse district, then went directly to the College of Wooster, where he snagged a degree in neuroscience. This prepared him well to become a street musician, playing looping electric tunes of his own creation, (https://www.facebook.com/milesschneider ) which then shifted into a job teaching music at a private school on the upper east side of New York.

Naturally there were some nail-biter moments along the way, but that comes with the territory. It was hard to know at the time how much I should trust their judgment, and how much to impose my own thinking. For the most part I just got lucky, and they found their own way.

In any case, I did pick up a few pointers in passing, particularly regarding schooling, that might be useful to pass on.

1. The most important was—everybody’s different. And because we’re all different, we don’t all have to follow the same path through conventional schooling and on into adulthood. All kids won’t thrive in all schools, even pretty good ones. Kids ain’t widgets.

2. If your kids don’t end up dead, or in prison, or addicted, or terrorists…relax! You’ve done something right, and so have they, so it’s all okay. Be the wind beneath their wings. On the other hand, if they’re clearly in a tail spin, that might be a clue that it’s time to step in. All of your best-laid plans—so it goes. You meant well. If that’s where you’re at, the hardest part may be letting go of your preconceptions. Maybe the military academy wasn’t quite the right match for young Jim after all. But on the other hand, the free school in the hills turned little Mary into a cult-follower. Admit it didn’t work out. It’s okay to hit the re-set button. Be open to alternatives! There are plenty of other ways to learn.

3. The third main schooling tip I can pass on is a book review for Colleges That Change Lives, originally by Loren Pope, and now updated by editor Hilary Masell Oswald. Mr. Pope made a career out of tracking down forty truly inspiring private colleges that somehow managed to fly under the radar of the ivy league, but in many ways surpassed them. I remember a few anxious years of reading through useless college guides that failed to give me any real sense of what the school felt like, or whether it would be a good match for my own kids. It was like trying to pick a spouse based on statistical ratings. Then I discovered Pope’s book. The clouds parted. The birds sang. And I found rich descriptions of intriguing schools, including two of the three schools my boys ended up attending. I never found anything else remotely comparable, inspiring, useful or readable. If you’re at a point in your life where you’re ready to research colleges, I highly recommend it. 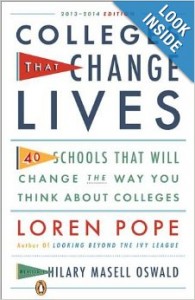