America’s just plain funny about toilets. We love them. We need them. At least at home, we even might doll them up a bit with fuzzy covers and matching throw rugs. But ultimately, especially in public spaces, we hide them.

When it comes to what we can face directly, America is oddly squeamish. Homicide is fascinating to watch, but Janet Jackson’s exposed breast is scandalous. Heterosexuality is wildly popular, but the details are rated X. And bodily functions, we all agree, are perfectly natural but, well – they’re just not discussed in polite society.

Hence this discussion about bathrooms.

When I was a kid, I was nervous about school bathrooms. These were good places to get beat up on, modest temples of misbehavior. That’s where I got into a middle school fight with Steve Peffers over a pen. We were noisy. Mr. Edelman caught us in a stall, our hands in the commode, the pen circling the drain. He held us after school, and called our parents. I was sure this meant I’d never go to college.

Now where was I? Ah yes, bathrooms. If you’re looking for a place to smoke something, pick on each other, or cause general mayhem, bathrooms are still ideal. “School bathroom fight” pulls up a long list of pathetic homemade videos on the topic via YouTube.

A reality TV show is long overdue. But in the meantime, here are some points to consider:

• If the bathroom uses a double-door entry, this helps contain unpleasant sights and sounds related to bodily functions, but it also helps mute clues to misbehavior, such as shouts, blows or cigarette smoke. Remodeling to a maze entry helps resolve this. 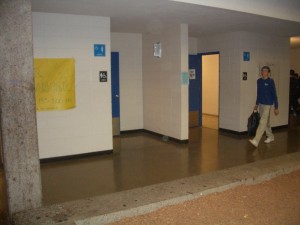 • If the bathroom is hidden, nobody can see what’s going on there. Build bathrooms within visual range of responsible adults, such as near the main office or other staffed locations.

• Use construction materials that can stand up to anticipated misbehavior. When the Calgary Drop-In Center built their 4-star homeless shelter (the amazing CDIC) they looked to the prisons system for guidance. The results included stainless steel fixtures and industrial hose connections for major clean-ups. (Photo at top of blog entry.)

• Maintenance is critical for a number of reasons, including general health and functionality, but also because poorly maintained, poorly ventilated bathrooms stink. When bathrooms stink, people avoid them. When staff have more pleasant facilities to turn to, that’s where they’ll go, which means less supervision for the stinky bathrooms. This means that delinquents own that turf by default.

• Examine the bathrooms for hiding places, where contraband or weapons could be stashed.

• Examine bathroom windows to determine vulnerability in terms of access control, for either people or contraband. Steel mesh barriers can be installed in some of these situations.

While you’re at it, consider some hygiene bonuses:

• Mount sinks out in the hallway, or in a half-exposed location, rather than hidden inside the bathroom proper. Exposed sink areas reduce the amount of criminal mischief that occurs there. Think paper-towel fights. They also make it easier for staff to notice if students remember to wash their hands, and remind them to do so.

• Design for ease of maintenance. If clean-ups are overly labor-intensive they’re less likely to get done. One bathroom at the Brussels airport had this in mind when they bought special urinals, pictured here. At a glance, it appears to have attracted a fly. Upon closer examination, it becomes clear that the fly is art-work, etched into the porcelain. Designers determined that men of all ages couldn’t help aiming for the wretched insect—reducing spills, and consequent clean-ups, by 80% or more!