If I had a hammer, I’d keep it in the classroom

A decade or two back, when schools started getting hip to CPTED concepts, there was a big push to limit access. This is fine as far as it goes, but it was applied in either overly broad brush strokes or ineffective splotches. A tightly controlled main entry is a great place to start, it’s just a bad place to stop. It can be an effective deterrent, but it only really stops an intruder if he can’t slip in through a back door, or piggy-back in through a door held open by a legitimate student, or shoot the twelve-year-old greeter at the main entry, or the School Resource Officers staffing the metal detectors, or if he hasn’t considered simply blow out a glass door, as happened in Sandy Hook in 2012.

So access control is a good idea if done right, meaning if each of the what-ifs just mentioned are addressed. But the counterpoint that should tag along with access control is egress ability. Because keeping people out is only one concern. Equally important is the ability to escape.

In some school shootings, this was a moot point. There just plain wasn’t enough time to flee. Students were caught flat-footed, in shock, with the entire event over and done with before they even had a chance to race for a fire door. Thurston High’s cafeteria did have secondary exits, but students still couldn’t flee in time. The scenario was slightly different in Red Lake seven years later, when students heard shooting, had enough time to react and went into lockdown. But when Jeffrey Weise blew out a classroom door he found his victims huddled under their desks, despite the fact that there was a secondary exit available. In that case, their school safety plan said nothing about fleeing, and they were dutifully staying in place. In both schools, everyone was terrified, and most were unable to think straight. At Thurston High a brave handful finally managed to tackle Kip Kinkle while he was reloading, but by then he’d killed two and injured twenty five more.

So secondary exits, in and of themselves, are no panacea, but they are a good idea. Every room should have one, and they should be incorporated into our emergency response plans. First, they need to exist, and second, we need to remain flexible enough in our crisis planning that students feel empowered to use them as needed, if the initial plan is failing for any reason. They should be prepared to switch to either a predetermined or an improvised plan B.

Fifteen years ago there was a big push for greater access control. Individual schools were dutifully designed with only one main entry. In line with this emphasis on access control, classrooms lost their secondary exits, much to teachers’ dismay – teachers had used those doors all the time, either to let in air because the HVAC system didn’t work or to take students outside for gardening or play time. These secondary doors could also be used as supervised entry points, reducing the congestion at the main entry, and helping younger students avoid bullying in a larger setting. Now teachers lost on all three counts — no more air control, no intimate entry option, and no direct garden access–they now felt hermetically sealed off from the natural world.

And to make matters worse, they weren’t safer. They were trapped. Now if a shooter came to the door, they had no means of escape.

Solutions include installing emergency exit doors or windows. One obstacle here is to figure out a way to retain the ability to keep intruders out, while at the same time making it possible for students to flee if necessary. Projectile-resistant glass can keep trouble out,

But the need to incorporate the egress function can complicate matters. One clever feature in the window shown below serves both needs. Manufactured by Graham Thermal, this is a vandal-proof security screen (http://www.grahamthermal.com/security-vandal_screens.html). The window can be slid open for ventilation without allowing contraband or intruders to pass through, but if the window needs to serve as an emergency exit, a tug on the red lever allows the window to shift from sash to casement style, swinging open on side hinges. 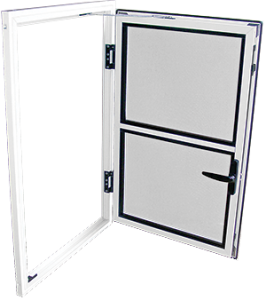 But new doors or windows cost money. Either schools need to incorporate these features from the outset or find money for retrofitting.

If neither is an option, the fallback position is to teach and equip teachers on the fine art of breaking windows—a move inherent with risks, due to shards of flying glass, but considering the alternative, it may be worth considering.